ITINERARY
Day 1. San Jose
Arrival, reception and transfer to the 5 star Ramada Herradura Hotel. Accommodation in a suite with dinner.

Day 2. San Jose
After breakfast, a visit to some of the highlights of San Jose, including the Jade Museum, one of Costa Rica's most famous museums. It is home to the world's largest American jade collection. A visit also to the National Theatre, probably the most ornate of all the city's public buildings. The theatre has marble staircases and gilded ceilings. A visit shall also be made to the Central Market, to hunt for souvenirs and sample some of Costa Rica's delicacies. After lunch, a visit to the Cariari Country Club, for your first round of golf at what is considered one of the best Golf courses in all of Central America. Built on an old coffee plantation, this 6,590 yard layout could challenge the creative abilities of any golf course architect in the world. With its tree-lined fairways, accuracy is far more important than length on most of the Cariari's 18 holes.
The Melia Cariari Golf Course has also hosted various amateur tournaments as well as featuring the best players from the Americas, the Caribbean and Europe. Return to your hotel for dinner and accommodation.

Day 3. San Jose - Liberia - Playa Conchal
After breakfast, transfer to the airport for the flight to Libreria, in the Guanacaste province. Arrival and private transfer to the deluxe Paradisus Playa Conchal, nestled in the green forests of Costa Rica's magnificent North-Pacific Riviera. Accommodation in a junior suite. Lunch and dinner at the resort.
This is the setting of the beautiful Garra de Leon Golf Course, a magnificent 7,030 yard coastal golf course, designed by Robert Trent Jones II. The spectacular resort surrounding Garra de Leon is considered the most luxurious golf & beach resort in the entire Central American continent. This beautiful sea-side golf course sits in one of the very most beautiful settings in all of Costa Rica. A day to enjoy your second round of golf.

Day 4. Playa Conchal - Parque Nacional Rincón de la Vieja and the Rincón Volcano
A visit today to this 14,161hectare (35,000-acre) National Park, named after its active volcano, Rincón de la Vieja. Thirty-two rivers and streams have their sources within the park and is home to the country's highest density of national flower, the guaria morada, a purple orchid. The wildlife in the park is extremely varied with almost 300 species of birds.
The Rincón Volcano is about one million years old and is the third most active volcano in Costa Rica. It has nine active craters and with some mild activity since the late 1960s. The most recent eruption of steam and ash was in 1997. Return to your hotel.

Day 5. Playa Conchal
Free day at leisure or choose from a third round of golf, tennis, fitness centre and a wide variety of water sports.

Day 7. Playa Conchal -Arenal
After breakfast, private transfer to Arenal National Park, site of the Arenal Volcano. Overnight stay at the Tabacon Lodge. Arenal is the only volcano in Costa Rica constantly active since it first awoke from its dormancy after 400 years.
Arenal's status changed dramatically in July 1968, when an explosive eruption produced hot avalanches and ejected blocks that devastated the west flank of the volcano and killed 78 people. Arenal has been continuously active since 1968. It rises 1,633m above sea level and casts an almost flawless silhouette on the land below it. Arenal's last explosion was in 1969 but this volcano is far from dormant. Its constant rumblings are Arenal's most popular characteristics. Often spewing ash and smoke, the volcano provides a striking backdrop for photographs and video. There are several excellent look out points along the highway and several resorts and spas have developed in the area. In the evening at the hot springs of Tabacon, you will enjoy a bath in the sulphur water formed by the natural pools in this geologically active area. Chance of viewing some volcanic eruptions. 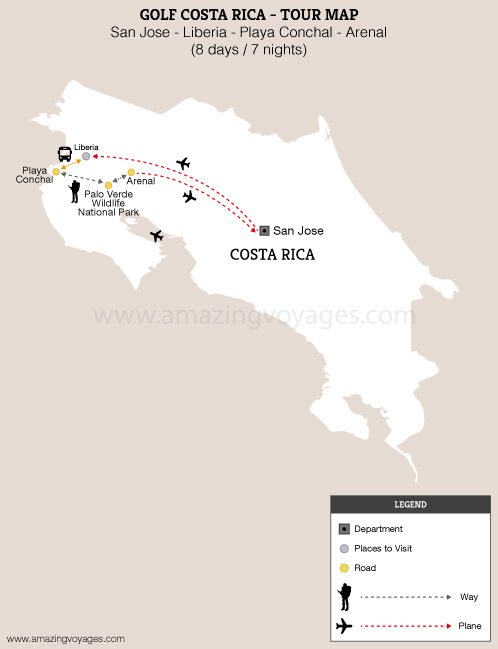