Follow in the footsteps of the famous revolutionary as we trace his life through Cuba's turbulent past.
7 days/ 6 nightsHavana - Villa Clara - Pinar del Rio

ITINERARY
Day 1 Havana (D)
Arrival in Havana. Reception and transfer to your hotel, the 4 star Comodoro. Dinner at your hotel.

Day 2. Havana (B, L & D)
After breakfast, a guided city tour on foot including the Josi Marti memorial, the revolution museum and San Carlos de la cabana fortress. Founded on its present site in 1519, the settlement of San Cristobal de La Habana prospered mainly due to its bay, which was a natural port of call for ships sailing to and from the New World. This was one of the main historical reasons for the subsequent development of a city noted for its architectural diversity and whose nucleus still contains an exceptional collection of buildings put up around public squares, and has led UNESCO to declare it a part of its world heritage in 1982. Over eight and a half miles (14 kilometers) of excellent beaches lie to the east of the Cuban capital, which is symbolized by the Giraldilla.
To the south, a green belt contributes to a healthful atmosphere. The city itself is a cultural centre with a solid infrastructure of hotels and is prepared to host all kinds of conferences and congresses. Alejo Carpentier, one of Cuba's most famous authors, called it "the city of columns" and focused attention on its streets, which he considered a perennially rich show of life, humanity and contrasts that was bound to entertain any observer. The settlement of San Cristóbal de La Habana, which was founded in the south western part of the island in 1514, was moved to the northern coast of the port of Carenas in 1519. Every November 16th, the anniversary of its founding is observed with a picturesque traditional ceremony at the Templete, around an ancient silk-cotton tree in whose shade-according to tradition, was the first meeting of the town council and where the first Mass was held. Return to your hotel for dinner and time for dancing in a youth recreational centre.

Day 3. Havana - Santa Clara - Rio Seibabo (B, L & D)
After breakfast, transfer to Santa Clara and visit the Che Guevara Memorial and the Tren Blindada Museum, the monument of Che at the Plaza de la Revolucion Ernesto Guevara including the huge bronze statue of Che. The remains of Che and his comrades who fell in Bolivia have been interred at this site and the mausoleum is open to the public. Under the monument is a museum, the "Museo Historico de la Revolucion" with excellent displays about Che's life and his role in the revolution. Lunch before transfer to Rio Seibabo and lodging. Time to enjoy a swim in the river before dinner.

Day 4. Rio Seibabo (B, L & D)
After breakfast, trek to the Cascada del Tiburon with a visit to a local farm where Che Guevara spent his life. Free time before dinner.

Day 5. Rio Seibabo - Havana (B, L & D)
After breakfast, transfer to Havana and accommodation at the 4 star Hotel Comodoro.

Day 6. Havana (B, L & D)
After breakfast, transfer to La Guira National Park with a visit to the Cueva de los Portales, where Che Guevara had his headquarters. Commander Che Guevara picked Cueva de los Portales in Pinar del Río province for his western command post and headquarters. Here he and an assortment of some 50 extraordinary Cuban and Russian army personnel resided during two rain and hurricane seasons. Today the site sports a museum chronicling that most dangerous episode. The caves and entrances are large yet well hidden by the surrounding vegetation allowing Che and staff to watch American military planes fly overhead. U.S. intelligence never detected them. Che divided the cave into departments: baños, communications, kitchen, meeting rooms, bunkers and barracks where he and his soldiers slept. You will see Che's modest hammock, along with target practice ranges, cooking and eating spaces, smoking and chess playing rooms, and corners where top secret messages were written and dispatched.
In these dank confines Che and his officers met, talked via radio with field leaders and consulted hour-by-hour with El Comandante Fidel Castro. Cave accesses were guarded by unwavering conscripts standing hours-on-end atop high rocks to protect this strategic hideout. The cave is moist and hot with the Río San Diego flowing through it and into the jungle beyond. Lunch before returning to Havana. Dinner and farewell party at the youth recreational centre.

Day 7. Havana (B)
After breakfast, transfer to the airport for your flight home.

Back to Top
PRICE
Please Contact Us
WHAT IS INCLUDED / NOT INCLUDED
Our price Includes:
The GBP price includes international return flights from London in economy class, accommodation in 4 star hotels & a simple lodge in Rio Seibabo, all private tours with an English speaking guide, all entrances fees, transfers in private, all meals as indicated in the itinerary and all taxes.
Our price does not include:
Meals not specified and travel insurance are not included. Business class and First class international air ticket quotes provided upon request. The US$ price does not include the international return flights.
Notes
Accommodation subject to hotel space availability at the time of booking.
All year round departure dates.
All US passport holders must enquire personally to the Cuban consulate for their eligibility to travel to Cuba.
Back to Top
TOUR MAP 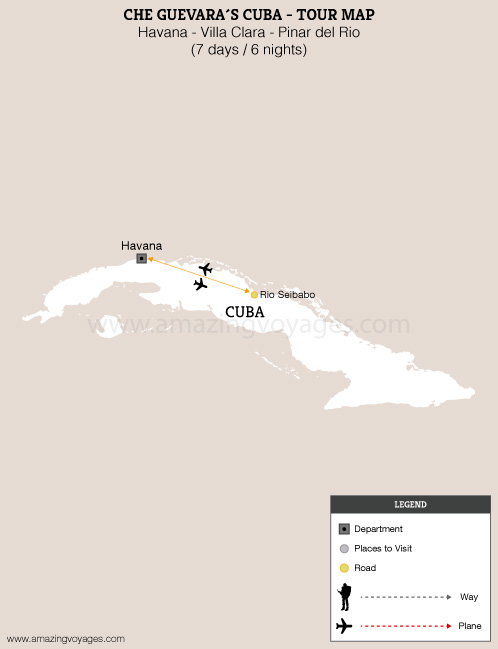