Day 2. Santiago de Cuba (B & L)
After breakfast, city tour with a local guide. Cuba Santiago de Cuba was founded in 1515 by Governor Diego Velázquez. The King of Spain made it the capital of the island in 1522, and it remained so until 1553.
This is the Cuban city with the greatest Caribbean flavor, and it hosts many popular festivities. It is also distinguished by having been the scene of the most important events in Cuba's history and by being the place where the Virgen de la Caridad del Cobre (Our Lady of Charity of El Cobre), Cuba's patron saint, is venerated with the most fervour. The adjacent mountains and sea are ideal for ecotourism and adventures, water sports, cruise ship tourism and health tourism. When visiting Santiago de Cuba, be sure to stroll through its streets, to see the friendship and contagious enthusiasm of the people who live here. Either of its two main arteries, Enramada and Aguilera Streets, will take you from the Plaza de Marte (parade ground) to Céspedes Park, the heart of the city. Magical Santiago de Cuba was the birthplace of the bolero, the conga and the son. Several cultures blend in this city to give it a distinctive culture of its own. Racial mixing-Spanish, black and French-is more clearly seen here than in the rest of the country. The city has around 15 museums and many other places related to folklore.

Day 3. Santiago de Cuba - Havana (B)
After breakfast, transfer to the airport for the flight to Havana. Reception and transfer to your hotel, the 4 star Comodoro.

Day 4. Havana (B)
After breakfast, a guided city tour on foot of the historical centre of Havana including a visit to the Palacio de la Artesania.
Founded on its present site in 1519, the settlement of San Cristóbal de La Habana prospered mainly due to its bay, which was a natural port of call for ships sailing to and from the New World. This was one of the main historical reasons for the subsequent development of a city noted for its architectural diversity and whose nucleus still contains an exceptional collection of buildings put up around public squares, and has led UNESCO to declare it a part of its world heritage in 1982. Over eight and a half miles (14 kilometers) of excellent beaches lie to the east of the Cuban capital, which is symbolized by the Giraldilla. To the south, a green belt contributes to a healthful atmosphere. The city itself is a cultural center with a solid infrastructure of hotels and is prepared to host all kinds of conferences and congresses. Alejo Carpentier, one of Cuba's most famous authors, called it "the city of columns" and focused attention on its streets, which he considered a perennially rich show of life, humanity and contrasts that was bound to entertain any observer. The settlement of San Cristóbal de La Habana, which was founded in the southwestern part of the island in 1514, was moved to the northern coast of the port of Carenas in 1519. Every November 16th, the anniversary of its founding is observed with a picturesque traditional ceremony at the Templete, around an ancient silk-cotton tree in whose shade-according to tradition, was the first meeting of the town council and where the first Mass was held.

Day 6. Havana - Cienfuegos (B)
After breakfast, transfer to Cienfuegos and accommodation at the 4 star La Union. Tour of the City. Considered the Cuban architectural jewel of the 19th century, Cienfuegos is outstanding for the perfect design of its streets and for the refinement and good taste of the buildings in the historical centre of the city, which has been declared a national monument. When visiting, stop by the Casa del Fundador (Founder's House); Nuestra Señora de la Purísima Concepción (Our Lady of the Immaculate Conception) Cathedral; Tomás Terry Theater; Ferrer Palace; and José Martí Park, which contains the only arch of triumph in Cuba.
Other attractions include the Prado Promenade, Valle Palace, Museums of Naval and Provincial History, Reina (Queen's) Cemetery and Jai-Alai Courts. Farther out from the center of the city, tour the Nuestra Señora de los Angeles de Jagua (Jagua for short) Fortress, Tomás Acea Cemetery and the Botanical Gardens. In addition to these cultural and historical attractions, Cienfuegos has excellent facilities for scuba diving and other water sports, nature tourism and thermal baths.

Day 9. Cienfuegos - Varadero (B)
After breakfast, transfer to Varadero and accommodation at your beach resort, the 4 star Sol Palmeras all inclusive resort.
Varadero's main attraction has always been its marvellous beach, but this isn't all it has to offer. You can explore its caves and escarpments and a necklace of virgin keys that are easily accessible. In addition, Cárdenas, the nearby city of Matanzas, the Zapata Peninsula and the San Miguel de los Baños Spa offer cultural, historic and natural attractions. Varadero is also a free port and has exceptionally good conditions for scuba diving, deep-sea fishing, yachting and other water sports.

Day 14. Santiago De Cuba (B)
After breakfast, transfer to the airport for your return flight home.

Back to Top
PRICE
Please Contact Us
WHAT IS INCLUDED / NOT INCLUDED
Our price Includes:
The GBP price includes international return flights from London in economy class, accommodation in 4 & 5 star hotels, all private tours with an English speaking guide, all entrances fees, transfers in private, all meals as indicated in the itinerary, domestic flights in economy class where available and all taxes.
Our price does not include:
Meals not specified and travel insurance are not included. Business class and First class international air ticket quotes provided upon request. The US$ price does not include the international return flights.
Notes
Accommodation subject to hotel space availability at the time of booking. All year round departure dates.
All US passport holders must enquire personally to the Cuban consulate for their eligibility to travel to Cuba.
Back to Top
TOUR MAP 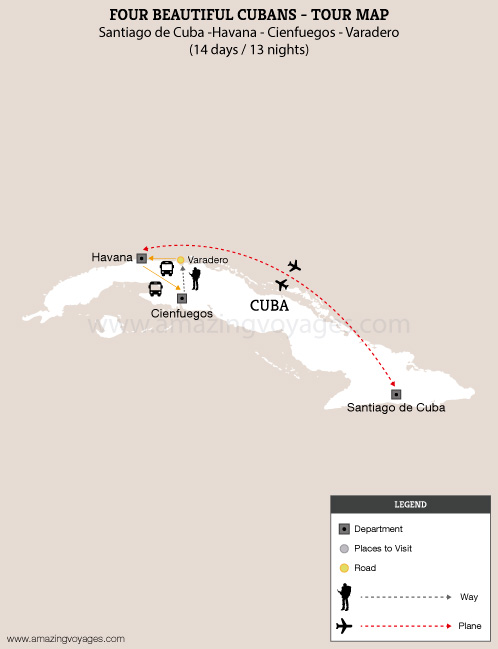