A wonderful voyage through Europe's greatest cities, London and Paris.
Visiting splendid sites and staying at unique 5 star deluxe hotels with some of the finest dining venues in Europe; this is the ultimate private luxury tour through two of the world's greatest cities.
10 Days/ 9 NightsLondon - Paris

ITINERARY
Day 1: London
Arrival in London, reception and private transfer to your hotel, Claridge's, a deluxe 5 star hotel opposite our London based offices. Accommodation in a deluxe room.

Day 2: London (B & L)
After breakfast, a walking and private car tour visiting some of the highlights of this magnificent capital city which dates back to Roman times. We shall drive past the houses of Parliament and Big Ben stopping at Westminster Abbey for a tour around the magnificent landmark founded in 616AD.
Since the coronation of King Harold in 1066, Westminster Abbey has seen the coronation of all English and British monarchs to the present day except Edward V and Edward VIII neither of whom had coronations.
In addition to the coronation of Kings and Queens, Westminster Abbey also houses the final resting place of many British luminaries such as Charles Darwin, Charles Dickens and Sir Isaac Newton to name but a few. A visit to St Pauls' Cathedral before stopping for lunch at 'the Grill' in the Dorchester Hotel.
The tour continues with a visit to, the famous Tower Bridge of London and the London Tower which houses the Crown Jewels of the United Kingdom. Return to your hotel. Free evening.

Day 3: London (B & D)
After breakfast, we will continue the tour of London taking in Buckingham Palace with the changing of the guard (subject to weather and other factors), Piccadilly Circus, and Trafalgar Square with the famous Nelson's Column. In the afternoon, we shall visit the British Museum, one of the world's greatest museums. The museum houses the world's largest and most comprehensive collection of Egyptian antiquities outside of the Egyptian Museum in Cairo including the Rosetta Stone. After the trip, you shall enjoy afternoon English tea at Fortnum and Mason. Return to your hotel. Dinner at Le Gavroche.

Day 4: London (B)
A free day at leisure taking in more sights or enjoying some shopping at famous venues such as Harrods, Bond Street and Knightsbridge.

Day 5: London - Paris (B)
After breakfast, transfer to the airport for the 1 hour flight to Paris, reception and private transfer to your hotel, The Ritz, a fabulously opulent deluxe 5 star hotel widely regarded as the best hotel in Europe. Accommodation in a deluxe room.

Day 6: Paris (B & L)
After breakfast, a walking and private car tour visiting some of the highlights of Paris. Split by the River Seine, the tour will include passing across Pont Neuf, the oldest bridge in Paris dating back over 400 years, followed by Notre Dame Cathedral, a 12 century Gothic masterpiece. Dating back to 1163, Notre Dame is the cathedral of Paris and the seat of the Archbishop of the city.
After a guided tour, we shall visit the ubiquitous Eiffel Tower, the icon of Paris and France which was completed in 1889. A trip to the top of the Eiffel Tower. (We shall endeavour to accommodate this when first arriving but there may be a queue or the tower may even be closed due to weather and other factors). Lunch at the Carre des Feuillants restaurant.
After lunch, we shall visit the basilica of Sacre Coeur in the hilltop quarter of Montmartre. Once, one of the world's most influential artistic centres, today it is a splendid place to walk around sampling a coffee or for a little shopping. Some free time will be provided for you at leisure.
Return to your hotel along the imposing Champs Elysees, past the majestic Arc de Triomphe to the Place de Concorde with more breathtaking views of the Eiffel Tower.

Day 7: Paris (B & D)
After breakfast, a full day visit to the Louvre, the great Parisian Museum and also the most visited museum in the world. The museum opened its doors on 10 August 1793 with an exhibition of 537 paintings and today houses over 35,000 objets d'art with such famous works as the Mona Lisa by da Vinci, the Wedding feast of Cana by Veronese and Liberty Guiding the People by Delacroix; in addition to great sculptures such as Venus de Milo and the Winged Victory of Samothrace to name but a few. Return to your hotel. Dinner at the excellent Les Ambassadeurs Restaurant, one of the best in Paris.

Day 8: Paris - Versailles (B & L)
Today we will leave Paris and head to the magnificent Palace of Versailles, lying just outside of Paris. A royal chateau which was embellished by the Sun King Louis IV in the 17 century, this magnificent chateau with its vast grounds is an incredible testimony to the heights of royal extravagance. Lunch at Les Trois Marches before returning to Paris.
Tonight, a wonderful opportunity to enjoy an opera/ballet production in Paris like no other with VIP seats at the Palais Garnier, also known as the Paris Opera house. Once the haunt of the famous Phantom, this opulent opera house houses the famous Grand Staircase, one of the grandest features of the Palais Garnier. Built in marble of various colours, the double stairway leads to the foyers and the different levels of the auditorium. With productions of both Opera and Ballet, you will be invited to enjoy a production in VIP seats. Return to your hotel.

Day 9: Paris (B)
After breakfast, free day to go shopping along the famous Champs Elysees or perhaps along the Seine to the bouquinistes, second-hand dealers in rare books, prints and postcards. Car and driver will be at your disposal.

Day 10: Paris (B)
After breakfast, transfer to the airport for your return flight home.

Back to Top
PRICE
Please Contact Us
WHAT IS INCLUDED / NOT INCLUDED
Our price Includes:
The price includes accommodation in 5 star deluxe hotels in superior/deluxe rooms, all tours in private with English speaking guides, afternoon tea at Fortnum and Mason, some meals as per the itinerary at first class gourmet restaurants (no alcoholic drinks), business class air tickets London to Paris and all taxes.
Our price does not include:
Flight to London, meals not specified and travel insurance are not included.
Back to Top
TOUR MAP 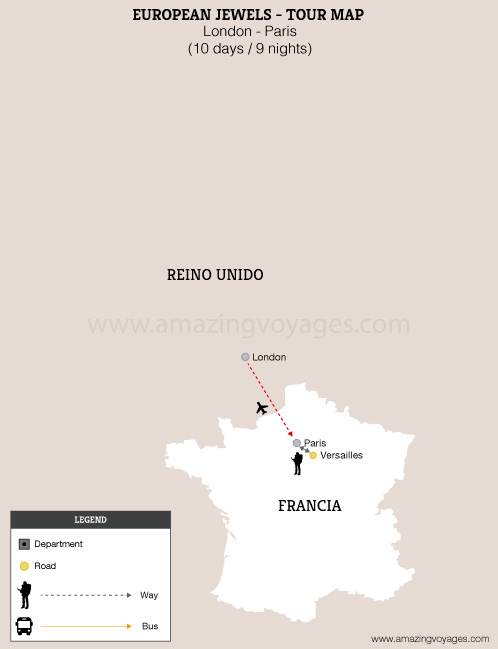