A Voyage across Britain

The ultimate voyage of discovery across Great Britain visiting London and its superb museums, cathedrals, green parks and royal pageantry before taking in a grand steam train journey to the West Country. After visiting prehistoric Stonehenge you will fly over the border to Scotland, and its wonderful capital, Edinburgh. After a visit and day of enjoying the delights of Scotch whisky from production to consumption, the journey heads further north to the majestic Scottish Highlands and three nights at the incomparable Inverlochy Castle.
Staying at unique 5 star deluxe hotels, castles and country homes, with some of the finest dining venues the country has to offer, this is the ultimate private luxury tour of Great Britain.
13 Days/ 12 NightsLondon - Edinburgh - Inverlochy Castle - Scottish Highlands

ITINERARY
Day 1: London
Arrival in London, reception and private transfer to your hotel, Claridge's, a deluxe 5 star hotel opposite our London based offices. Accommodation in a deluxe room.

Day 2: London (B & L)
After breakfast, a walking and private car tour visiting some of the highlights of this magnificent capital city which dates back to Roman times. We shall drive past the houses of Parliament and Big Ben stopping at Westminster Abbey for a tour around the magnificent landmark founded in 616AD.
Since the coronation of King Harold in 1066, Westminster Abbey has seen the coronation of all English and British monarchs to the present day except Edward V and Edward VIII neither of whom had coronations.
In addition to the coronation of Kings and Queens, Westminster Abbey also houses the final resting place of many British luminaries such as Charles Darwin, Charles Dickens and Sir Isaac Newton to name but a few. A visit to St Pauls' Cathedral before stopping for lunch at 'the Grill' in the Dorchester Hotel.
The tour continues with a visit to, the Tower Bridge of London and the London Tower which houses the Crown Jewels of the United Kingdom. Return to your hotel. Free evening.

Day 3: London (B & D)
After breakfast, we will continue the tour of London taking in Buckingham Palace with the changing of the guard (subject to weather and other factors), Piccadilly Circus, and Trafalgar Square with the famous Nelson's Column. In the afternoon, we shall visit the British Museum, one of the world's greatest museums.
The museum houses the world's largest and most comprehensive collection of Egyptian antiquities outside the Egyptian Museum in Cairo including the Rosetta Stone. After the trip, you shall enjoy afternoon English tea at Fortnum and Mason. Return to your hotel. Dinner at Le Gavroche.

Day 4: London - Blenheim Palace (B & L)
After breakfast, a visit to Blenheim Palace, the birthplace of Sir Winston Churchill. The palace today remains the home of the Dukes of Marlborough and a full guided tour through the palace and grounds will be followed by exquisite lunch at the world renowned Le Manoir aux Quat' Saisons lunch. Return to your hotel.

Day 5: London - Bath (B & L)
After breakfast, embark on a marvellous steam train journey to Bath aboard the luxurious British Pullman train. Your steward will show you to your reserved seat in one of eleven carriages, each an original masterpiece from the 1920's or 1930's with their own name and unique personality.
The service, like your journey, will be calm and unruffled. Settle back into your deeply comfortable seat and be transported into another age while Britain's glorious countryside unfolds past your window.
The British Pullman can carry up to 252 passengers and consists of 11 parlour cars, of which 5 are kitchen cars, and a service car. The carriages seat between 20 and 26 passengers in each.
With plush upholstery, surrounded by intricate marquetry, mosaic floors, solid brass fittings and softly-shaded lamps, your table is set with starched white cloths, shining silver and glittering glass. The cuisine is a delight and accompanied by wines judiciously chosen to complement the fine food.
Arrival to Bath at 15:55. Transfer to your hotel, the wonderful Relais & Chateaux Royal Crescent Hotel. Accommodation in a deluxe room.

Day 6: Bath (B)
After breakfast, a guided visit of the famous spa town which dates back to Roman times.
Free afternoon in Bath to visit museums and antique shops.

Day 7: Bath - Stonehenge - Bristol - Edinburgh (B, L & D)
Today with a private guide and car, visit the ancient prehistoric site of Stonehenge dating back to 3100 BC. A UNESCO World heritage site it is thought to have served as a burial ground from its earliest beginnings. The dating of cremated remains found that burials took place as early as 3000 B.C, when the first ditches were being built around the monument. Burials continued at Stonehenge for at least another 500 years when the giant stones which mark the landmark were put up. A guided tour of the area before lunch at the Lamb Inn, a beautiful, former coaching inn dating back to the 12th century. After lunch, we continue onto Bristol and onto the airport for the one and a half hour flight to Edinburgh. Arrival and transfer to your hotel, the luxury Howard Hotel. Accommodation in a junior suite. 3-course dinner in the Atholl dining room or served in your room by your butler.

Day 8: Edinburgh (B)
Private tour of Edinburgh city including Edinburgh Castle. The Castle sits on top of Castle Rock, an extinct volcano and has been a fortification for over 2,000 years. A visit to Holyrood Palace, the Queen's official residence in Scotland even though another famous figure in Scottish history married and lived here, Mary Queen of Scots. The High Kirk of Scotland has a history spanning back more than 900 years. With its four main pillars dating back to 1120, the High Kirk of Scotland or St. Giles as it is sometimes known is one of Edinburgh's most impressive buildings. Return to your hotel.

Day 9: Edinburgh - Glenkinchie Distillery (B)
After breakfast, a tutored whisky tasting session with a member of the hotel's butler team leading you through the best examples of single malts from the four main whisky producing regions. You will also receive £50 worth of vouchers to spend at Royal Mile Whiskies.
A private visit to Glenkinchie Distillery in East Lothian, home of 'The Edinburgh Malt'. Return to your hotel. To draw to an end this very special connoisseurs' day, a complimentary half bottle of Glenmorangie 10 year old malt, a copy of "Scotland and its Whiskies" by renowned author Michael Jackson and a traditional whisky snifter. Optional tours available for those not interested in the whisky day.

Day 10: Edinburgh - Inverlochy Castle (B &D)
Today, your private guided tour continues through Scotland as you head north towards Inverness and the magnificent Inverlochy Castle, your accommodation for three nights, nestled in the foothills of Ben Nevis. The hotel, once enjoyed by Queen Victoria herself, is an idyllic getaway and in prime location to explore northern Scotland. Dinner at the castle.

Day 11: Scottish Highlands (B)
Full day trip through some of the highlights of northern Scotland including Glencoe and Loch Laggan in your own private car with guide. Return to your hotel.

Day 12: Scottish Highlands (B)
Free day at leisure. Choose from exploring the region with many beautiful walks and treks in the area to fishing for trout or salmon (January to October), hunting (July - March) or continue touring with your private car and driver.

Day 13: Inverness (B)
After breakfast, return to Inverness for your flight home.

Back to Top
PRICE
Please Contact Us
WHAT IS INCLUDED / NOT INCLUDED
Our price Includes:
The price includes accommodation in 5 star deluxe hotels, a deluxe castle and luxury country hotels in superior/deluxe rooms, all tours in private with English speaking guides, afternoon tea at Fortnum and Mason, some meals as per the itinerary at first class gourmet restaurants (no alcoholic drinks), coach class air tickets Bristol to Edinburgh, first class carriage on the Pullman steam train to Bath and all taxes.
Our price does not include:
Flight to London, meals not specified and travel insurance are not included.
Back to Top
TOUR MAP 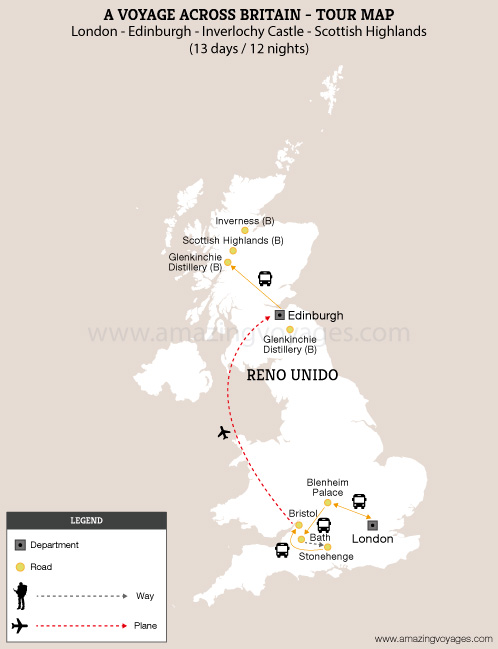