ITINERARY
Day 1: Athens (D)
Arrival in Athens, reception and transfer to the 5 star deluxe Grand Bretagne Hotel. Accommodation in a junior suite. Dinner at the hotel.

Day 2: Athens (B)
Free day at leisure. Why not stroll through the picturesque Plaka district only 10 minutes from your hotel.

Day 3: Athens (B & D)
After breakfast, a full day's private guided tour of Athens and the Acropolis to see the Parthenon, one of the most important monuments in the Western world. The Parthenon is a temple of the Greek goddess Athena, built in the 5th century BC. It is the most important surviving building of Classical Greece, generally considered to be the culmination of the development of the Doric order. Its decorative sculptures are considered one of the high points of Greek art. The Parthenon is regarded as an enduring symbol of ancient Greece and of Athenian democracy.
After the tour, visit the National Archaeological Museum in Athens. The museum houses some of the most important artifacts from a variety of archaeological locations around Greece from prehistory to late antiquity. It is considered one of the great museums in the world and contains the richest collection of artifacts from the Greek antiquity in the whole world. Return to your hotel. Dinner at Spondi restaurant, one of the best Mediterranean restaurants in town.

Day 4: Athens - Corinth - Mycenae - Nafplion (B)
After breakfast, private transfer across the Isthmus of Corinth into the Peloponnese which separates mainland Greece from the Peloponnese peninsula. A visit to the ruins of ancient Corinth. Most of the surviving buildings are Roman rather than Greek; dating from the city's prosperous age after Caesar rebuilt much of the original Greek city, Roman armies having sacked it. The ruin that stands out particularly is the beautiful 6th century BC Temple of Apollo, built on a hill overlooking the remains of the Roman marketplace.
Much of the city has been toppled by recurring earthquakes over the centuries. Visit to the archaeological museum containing some worthwhile collections of mosaic floors, pottery and works of art. After Corinth, lunch (not included) before a visit to the ancient palace and citadel of Mycenae, a place of archaeological but fascinating controversy. Homer's fabulous story has it that the kingdom of Mycenae was dripping in gold and revelling in riches before King Agamemnon decided to lead an assault on Troy, back in 1250BC. The king started a war that lasted a decade, battling to win the beautiful Helen of Troy back from Prince Paris. German archaeologist Heinrich Schliemann discovered Mycenae, which he believed gave credence to Homer's tale in 1874 after he had excavated the remains of Troy itself. There is no doubt that Mycenae was a city of power and prosperity and the ruins, from the Lion Gate (the oldest example of monumental sculpture in Europe) to the palace complex, houses and beehive tomb of Agamemnon, are well worth exploring. Most of the more exceptional finds from the site are on exhibit at the National Archaeological Museum in Athens. These include frescoes, gold jewellery, and the gold mask said to have belonged to Agamemnon, among other priceless pieces. Continue onto Nafplion, and your hotel, the 5 star Grande Bretagne.

Day 5: Nafplion - Epidaurus - Nafplion (B)
After breakfast, a visit to the ancient theatre of Epidaurus, built in the 3rd century BC and so well preserved that with little or no restoration it is still in use today for regular summer dramatic performances, which are lent a mystical aura by the beautiful setting. The theatre has perfect acoustics, allowing even a whisper on stage to be heard in the back row of the limestone amphitheatre, which can seat 14,000. Visit to the surrounding archaeological complex of the sanctuary of Aesclepius. Return to Nafplion. Free day to enjoy the old capital of Greece. The town does sport picturesque streets overhung with wooden balconies cascading with bright flowers. Some lively outdoor cafes and fascinating mosques add to the atmosphere.
Energetic visitors can climb the 857 steps to the Venetian Fortress of Palamidi that overlooks the city, but most prefer to just enjoy the tavernas on the waterfront, the open-air cinemas and the beaches.

Day 6: Nafplion - Bassae - Olympia (B)
After breakfast, we head west towards Bassae and its well-preserved mid-5th century BC Temple of Apollo Epicurius. After the tour, continue onto Olympia where amongst shady pine, olive and oak trees, lie the remains of two temples and the stadium where the first Olympic Games took place in 776 BC. Since the modern Olympics were inaugurated in 1896 torchbearers have set out from Olympia to carry the Olympic flame in relays across the world to wherever the games are held every four years. The site also boasts one of the finest archaeological museums in Greece.
The ruins themselves are fascinating, being the remnants of an ancient Olympic village including a gymnasium, baths, the Prytaneion where winners were honoured, and a Doric Temple dedicated to Hera. Continue onto Kyllini and to your hotel, the Mandola Rosa suites.

Day 7: Olympia (B)
Free day at leisure. Enjoy the sea or perhaps go horse-riding or visit the thermal Springs of Kyllini.

Day 8: Olympia - Delphi - Arachova (B & D)
After breakfast, we start the trip back to the Greek mainland to the town of Arachova and to Delphi, on the slope of Mount Parnassus. This archaeological site includes the Sanctuary of Apollo, the site of the ancient Oracle, and a major site for the worship of the god Apollo.
Apollo's sacred precinct in Delphi was a Panhellenic sanctuary, where every four years athletes from all over the Greek world competed in the Pythian Games, the precursor to the Olympic Games.
Delphi was revered throughout the Greek world as the site of the omphalos stone, the centre of the earth and the universe. In the inner hestia ("hearth") of the Temple of Apollo, an eternal flame burned. After the battle of Plataea, the Greek cities extinguished their fires and brought new fire from the hearth of Greece, at Delphi; in the foundation stories of several Greek colonies, the founding colonists were first dedicated at Delphi. Accommodation at the Santa Marina Arachova Hotel in a suite. Dinner at the hotel.

Day 9: Arachova - Meteora (B)
After breakfast, we travel north towards Thessaly in Central Greece and Kalampaka, the city under the rock towers of Meteora. Meteora is famous for the monasteries on the top of the rock towers some which date back to the 14th century. Drive around some of the magnificent monasteries before returning to the 5 star Meteora Hotel.

Day 10: Meteora - Thermopylae - Athens (B)
After breakfast, a visit to some of the monasteries with their wonderful wall paintings, ecclesiastical treasures, rich libraries containing precious manuscripts and exquisite icons. The Great Meteoran is the largest of the monasteries and the church 'Katholikon', honoured to the 'Transfiguration' was erected around 1387/88 and decorated in 1483 and 1552. The old monastery is today used as a museum. After the visit, return to Athens visiting on route the battle site of Thermopylae, where in 480 BC, an alliance of Greek city-states fought the invading Persian army. Vastly outnumbered, they held back the invader in one of history's most famous last stands. A small force led by King Leonidas of Sparta blocked the only road through which the massive army of Xerxes I could pass. After three days of battle, a local resident named Ephialtes betrayed them by revealing a mountain path that led behind their lines. Dismissing the rest of the army, King Leonidas stayed behind with 300 Spartans and 700 Thespian volunteers. Though they knew it meant their own deaths, they held their position and secured the retreat of the other forces. The Persians succeeded in taking the pass but sustained heavy losses, extremely disproportionate to those of the Greeks. The fierce resistance of the Spartan-led army offered Athens the invaluable time to prepare for a decisive naval battle.
Return to your hotel the Grand Bretagne Hotel.

Day 11: Athens (B)
After breakfast, transfer to the airport for your return flight home.

Back to Top
PRICE
Please Contact Us
WHAT IS INCLUDED / NOT INCLUDED
Our price Includes:
The price includes accommodation in 5 star hotels in superior/deluxe rooms, all tours in private with English speaking guides, some meals as per the itinerary at first class gourmet restaurants (no alcoholic drinks) and all taxes.
Our price does not include:
Flight to Athens, meals not specified and travel insurance are not included.
Back to Top
TOUR MAP 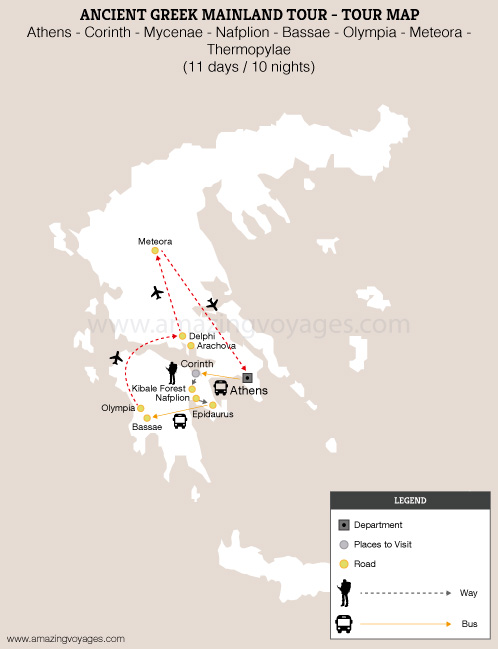