Day 2: Rio de Janeiro
After breakfast, a full day visit of the "marvellous city" including a sightseeing tour to Sugar Loaf Mountain. A two-stage cable car takes you to the top of Sugar Loaf Mountain where you will enjoy a splendid view of Rio, Copacabana Beach, and Guanabara Bay. Followed by a visit to Corcovado, the mountain home to the world famous, Christo Redentor statue for a magnificent 360° panoramic view of Rio. Return to your hotel. *Option of a spectacular dinner and show in Rio.

Day 3: Rio de Janeiro - Belo Horizonte
Transfer to the airport for the one hour flight to Belo Horizonte. Transfer to your hotel, the 5* Ouro Minas Palace Hotel. The capital of the state of Minas Gerais, with wide, landscaped avenues, Belo Horizonte is the distribution and processing centre of a rich agricultural and mining region. Belo Horizonte is also a leading cultural centre, with three universities, a historical museum, and numerous libraries. The city tour includes a visit to the Chapel of Sao Francisco which houses paintings by Candido Portinari. Return to your hotel.

Day 4: Belo Horizonte - Ouro Preto
After breakfast, full day tour to Ouro Preto, a UNESCO Historical and Cultural site. Founded in 1698, the city became the centre of the largest gold and silver rush in the Americas. Declared a national monument in 1933, the city has many gold-leafed baroque churches and many examples of sculpture, mostly by Antonio Francisco Lisboa. Visits to his masterpieces such as the Church of Sao Francisco de Assis and the façade of the Church of Nossa Senhora do Carma. Return to your hotel in Belo Horizonte.

Day 5: Belo Horizonte - Congonhas
Half day excursion to Congonhas, the centre of a nickel, iron and gold mining industry. The twon is dominated by the great pilgrimage church of Bom Jesus from 177 and its chapels, which are set in 18th Century style gardens. The main sanctuary is famous for its soapstone statues of the 12 apostles, again carved by Antonio Francisco Lisboa. Return to your hotel in Belo Horizonte.

Day 6: Belo Horizonte - Brazilia
Transfer to the airport for the flight to Brazilia, the capital of Brazil. Designed and built in only three years in 1960 it nevertheless won the title of UNESCO's heritage of humanity. Transfer to your hotel, the 5* Hotel Grand Bittar Brazilia. Half day panoramic tour including the little church of Our Lady of Fatima; the TV and Radio Tower and its panoramic plataform; President Medici's Sports Centre; the Buriti Palace and the Palace of the Dawn (the President's official residence). Return to your hotel.

Day 7: Brazilia - Manaus
Transfer to the airport for the flight to Manaus. Reception and transfer to the 5* Hotel Tropical Manaus. City tour of Manaus including a visit to the world famous Amazon Opera House. Built in 1881 at the height of the rubber boom, Manaus was one of the wealthiest cities in the world and was known as the "Paris of Latin America". A visit will also be made to the São Sebastião Church, built in 1888 has many paintings fixed to the wall and ceiling that were brought in from Italy.

Day 8: Manaus - Salvador
After breakfast, transfer to the airport for the flight to Salvador, capital of the state of Bahia and one of Brazil's highlights. Transfer to your hotel, the 5* Tropical da Bahia Hotel. It was on November 1st, 1501 that Amerigo Vespucci sailed into Salvador's bay, which subsequently became known as All Saints Bay. Founded in 1549, Salvador was to become the most important Brazilian city for the next 300 years. Another UNESCO heritage of humanity site, the city boasts many Portuguese colonial houses in addition to being the most African city in Brazil. A half day city tour including a visit to the Catedral Basilica, and Largo do Pelourinho, the old slave auction site.

Back to Top
PRICE
Please Contact Us
WHAT IS INCLUDED / NOT INCLUDED
Our price Includes:
Price includes international return flights from London, all accommodation in 4 & 5 star hotels, some meals, all tours with entrance tickets and an English speaking tour leader and all domestic flights in Brazil.
Our price does not include:
Meals not specified, airport taxes and travel insurance are not included in the quote.

Please ask for optional tours by helicopter over the Iguazu Falls or business class upgrades on all flights.
Back to Top
TOUR MAP 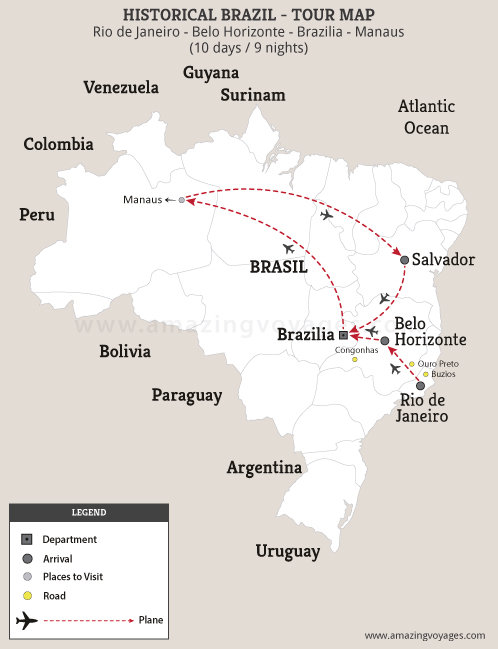