ITINERARY
Day 1: Rio de Janeiro
Arrival in Rio, reception and transfer to the 5* Copacabana Palace Hotel, one of the world's greatest hotels. Opened in 1923, this is Rio's most luxurious hotel and a member of the Orient-Express Hotel group. Dinner at the superb Cipriani restaurant, already rated among the city's best, offers a selection of Northern Italian cuisine.

Day 2: Rio de Janeiro
After breakfast, a full day visit of the"marvellous city" including a sightseeing tour to Sugar Loaf Mountain. A two-stage cable car takes you to the top of Sugar Loaf Mountain where you will enjoy a splendid view of Rio, Copacabana Beach, and Guanabara Bay. After lunch, a trip to the heart of Rio for a historical city tour including Santa Teresa, the Teatro Municipal and the Fine Arts Museum. The trip also includes a visit to the São Bento Monastery, the Candelaria (the candle-makers), Praça XV (where the royal family landed when they first arrived in Rio. Paço Imperial was their first residence), the "Travessa do Mercado", the Imperial Palace, the cultural centre located in the beautifully-restored Banco do Brasil and Casa Franca-Brazil (a masterpiece by the architect Grandjean de Montigny). Return to your hotel and dinner at the Pergula restaurant.

Day 3: Rio de Janeiro
After breakfast, private transfer to the Gavea Golf & Country Club for your first round of golf, considered to be one of the most beautiful and challenging golf courses in the world. Includes green fee, caddies and rental of golf clubs. Founded in 1921 and designed by the Arthur Morgan Davidson, it runs between the seaside peak called Gávea Rock (Pedra da Gávea) and the Tijuca National Forest. It is a short par 68, 6,000-yard, course where players can expect to use their irons more than their drivers. The front nine are played at the foot of the mountains, holes 10-14 at seaside, and 15-18 back astride the hills. The par-three hole five was rated as one of the world's most beautiful by Golf Illustrated magazine. Grand Slam winner, South African Gary Player, holds the record for the lowest round at Gávea and PGA pros Tom Watson and Billy Casper have also played the course. The clubhouse is a colonial farmhouse. Return to your hotel for dinner and accommodation.

Day 4: Rio de Janeiro
After breakfast, a half day visit to Corcovado, the mountain home to the world famous, Christo de Redentor statue for a magnificent 360° panoramic view of Rio. After, a trip to the Tijuca forest, a luxuriant tropical forest only minutes away from this huge metropolis. The Tijuca Forest is considered the largest urban forest in the world. It has 330 square kms of preserved Mata Atlântica (Tropical Forest), the highest mountaintops of Rio, waterfalls and hidden caves. A rich flora, with a great biodiversity and an incomparable natural beauty. The caves in the Tijuca Forest are formed of limestone and were originally formed by movements of the crust that caused the collapse of stones from the Papagaio Peak and the Archer Mountain. These stones started to form caves with rocky formations. Another important point is the great variety of bromeliads. The Tijuca Forest is considered to hold the largest concentration of different species of bromeliads in Brazil. Even more than the Amazon Jungle. Return for lunch and an afternoon of leisure to enjoy the magnificent Rio city. Dinner at an internationally renowned restaurant.

Day 5: Rio de Janeiro
Private transfer to the Itanhanga Golf Club located further south in the Barra de Tijuca district. Itanhanga is a par-72, 6,600 yard course that hosted a stage of the European PGA tour four years ago. Founded in 1933, the course was played by President Getúlio Vargas. Gene Littler and Gary Player have also played here. Return to your hotel for dinner and accommodation.

Day 6: Rio de Janeiro - Iguazu
Transfer to the airport for the flight to Iguazu. After lunch, a private excursion to appreciate the falls, the most voluminous falls in the world and more than three times the width of the Niagara Falls. The falls lie on the three borders of Brazil, Argentina and Paraguay. The tour will include a Macuco safari boat ride on the Parana River, heading towards the Iguazu falls themselves. Return to your hotel for dinner.

Day 7: Iguazu Falls
After breakfast, your third round of golf at the Iguazu Golf Course, an 18-hole course, par 72 and 6982 yard. Lunch at the clubhouse. Return to your hotel for dinner. Option of a helicopter ride over the Iguazu Falls.

Day 8: Iguazu Falls - Argentina side
A full day visit to the Argentinean side of Iguazu allowing for a closer appreciation. Set in a subtropical rain forest reserve of over 180,000 hectares, Iguazu is home to jaguar, puma, caiman and over 400 species of bird. Return to your hotel for lunch. In the afternoon, free time at leisure or an opportunity to play another round of golf at the Iguazu Golf Course.

Day 9: Iguazu Falls - Rio de Janeiro
After breakfast, private transfer to the airport for your return flight to Rio and your onward connecting flight home. You may reduce or extend this tour as per your preference. Please contact us if you require any modifications to this programme.

Back to Top
PRICE
Please Contact Us
WHAT IS INCLUDED / NOT INCLUDED
Our price Includes:
Price includes international return flights from London, all accommodation in 5 star deluxe hotels including Copacabana Palace and Das Cataratas, all a la carte meals, all private tours with entrance tickets, all domestic flights in Brazil including return helicopter flights in the jungle.
Our price does not include:
Meals not specified, airport taxes and travel insurance are not included in the quote. Please ask for optional tours by helicopter over the Iguazu Falls or business class upgrades on all flights.
Back to Top
TOUR MAP 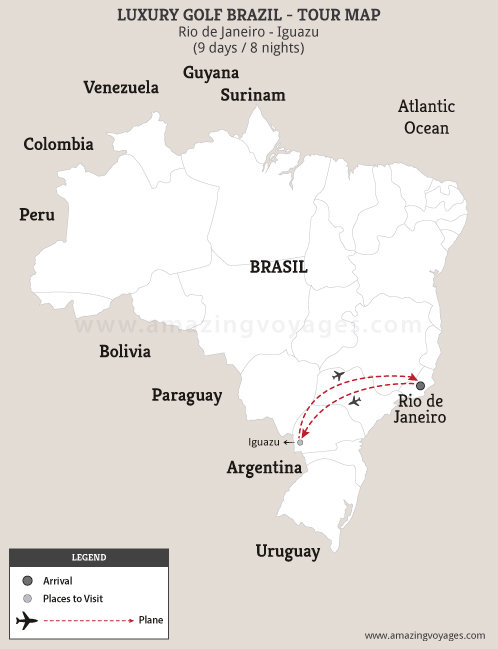