ITINERARY
Day 1. Buenos Aires
Arrival, reception and transfer to your hotel for two nights accommodation. Free day to wander around the city.

Day 2. Buenos Aires
After breakfast, a private city tour of perhaps the most cosmopolitan metropolis in South America. Most of the population is of European descent and the city is reminiscent of Paris. It is situated on the Rio de la Plata, and as its name suggests, it is the city of good winds. The tour will include a visit to the Plaza de Mayo, the hub of the city centre and where many public buildings such as the Catedral Metropolitana can be found. At the east end, you will find the Casa Rosada presidential palace with the famous balcony from which Juan and Evita Peron greeted the masses. A visit will also be made to the Teatro Colon, found at the intersection of Cirrito and Tucuman the world-class opera house that opened in 1908 with a presentation of Aida. It seats 2500 spectators and offers standing room for another 1000. There is also a museum featuring instruments, costumes and photographs of performers.
You shall also visit La Boca in Buenos Aires, the most colourful neighbourhood in the city. San Telmo, just a few blocks south of Plaza de Mayo is the artists quarter, what some believe to be Buenos Aires'most interesting feature.
A final visit to Recoleta, a very fashionable area where you can visit the fine arts museum, called Museo Nacional de Bellas Artes, and the city's gardens of Plaza Alvear and Plaza Francia. The latter hosts the largest crafts fair in the city every Sunday. Lunch at the La Bourgogne, the only Relais Gourmand in Argentina. The restaurant serves the finest French and international food in the city and according to Travel & Leisure magazine rated La Bourgogne the number one restaurant in South America, and Wine Spectator gave it the distinction of being one of the "Best Restaurants in the World for Wine Lovers." Return to your hotel. In the evening, dinner & tango Show in La Esquina Carlos Gardel, the foremost tango house in Buenos Aires.

Day 3. Buenos Aires - Mendoza
After breakfast, transfer to the airport for the flight to Mendoza. Transfer to Tupungato, in the UcoValley. The UcoValley is a privileged area for grape and high quality wine production at the foot of the Andean Mountain Range. With its unique landscape and 1000m altitude, you will find Chardonnay, Merlot, Malbec and Semillón grapes with different characteristics to those in other areas of the province. Transfer to your lodge, the Posada Salentein, surrounded by mountains, vineyards and forests. Visit to the cellars of Bodega Salentein. Wine tasting and dinner at the Posada.

Day 4. Tupungato - Mendoza - Tupungato
After breakfast, a visit to the Bodegas Lurton and Fapes in the UcoValley. Bodega Lurton, belongs to Jacques and Francois Lurton brothers, who use varietal and generic wines with Malbec, Cabernet Sauvignon, Merlot, Syrah and Grey Pinot. Bodega Fapes, is one of the oldest cellars. Lunch at Salentein before a guided excursion of Mendoza which dates back to the XVI Century. A visit to its tree-lined avenues and its streets bordered by 'acequias' (irrigation ditches). Dinner and accommodation at the Posada Salentein.

Day 5. Tupungato/Mendoza
After breakfast, a visit to Bodegas Norton and Lagarde. Bodegas Norton, founded in 1895 is located in Luján de Cuyo department. This winery has the most modern technology in the area where you will find Malbec, Cabernet, Merlot, Semillón, Chenin, Chardonnay, Riesling and Barbera d'Asti. Bodegas Lagarde is well known for its prestigious wines and regularly participates in international contests. Its fincas (productive ranches) are located in Luján de Cuyo county, Casa Vinícola Viniterra, located in Luján de Cuyo, is a boutique cellar which produces wines of the Chardonnay, Sauvignon Blanc and Chenin white grape varieties along with Malbec, Cabernet Sauvignon, Syrah, Merlot, Sangiovese and Bonarda. You shall also visit Bodega Domaine Vistalba. Their French owners have managed to elaborate styles similar to a French Chateaux. Return to Mendoza and your hotel.

Day 6. Mendoza - Santiago
After breakfast, start of the incredible high mountain crossing of the Andes with your guide in private vehicle. Arrival to Santiago and accommodation at your hotel.

Day 7. Santiago - Santa Cruz
After breakfast, a half day city tour of Santiago including a visit to the Museo Chileno de Arte Precolombino. This museum offers a thorough overview of 4500 years of pre-Columbian civilization throughout Central and South America. At the Main Square (Plaza de Armas) you shall appreciate the beautiful Cathedral, Post Office and National Museum. Continue along the main avenue called "Alameda" to admire the San Francisco Church and the National Library. You shall also see the Mercado Central which is one of Santiago's most colourful markets. A visit to Cerro Santa Lucia, where Santiago was founded in 1541. After lunch (not included), a visit to the Undurraga vineyard, one of the largest exporters of fine wines in Chile. The tour will end with some wine tasting before returning to Santiago. Transfer south to Santa Cruz, in the heart of the Colchagua Valley. Accommodation in Santa Cruz.

Day 8. Santa Cruz
After breakfast, a visit to Viu Manent and Bisquertt vineyards, followed by a visit to the vineyards of Montes, recipient of the coveted "New World winery of the year 2002 award". Accommodation.

Day 9. Santa Cruz -Santiago
After breakfast, we visit Los Vascos of Domaines. Barons de Rothschild-Lafite took over the Los Vascos estate (Los Vascos meaning The Basques, in honour of its Basque origins) in 1988. After lunch, return to Santiago and your hotel for your last night.

Day 10. Santiago
After breakfast, transfer to the airport for your return flight home.

Back to Top
PRICE
Please Contact Us
WHAT IS INCLUDED / NOT INCLUDED
Our price Includes:
Price includes international return flights from London, all accommodation in 5 star deluxe hotels and lodges, including Ritz Carlton and the Alvear Palace, most meals, all private tours with entrance tickets, all domestic flights in Argentina.
Our price does not include:
Meals not specified, airport taxes and travel insurance are not included in the quote.

During the months of June through to October, the trans Andean pass may be closed so we will substitute the crossing with a short flight.
Back to Top
TOUR MAP 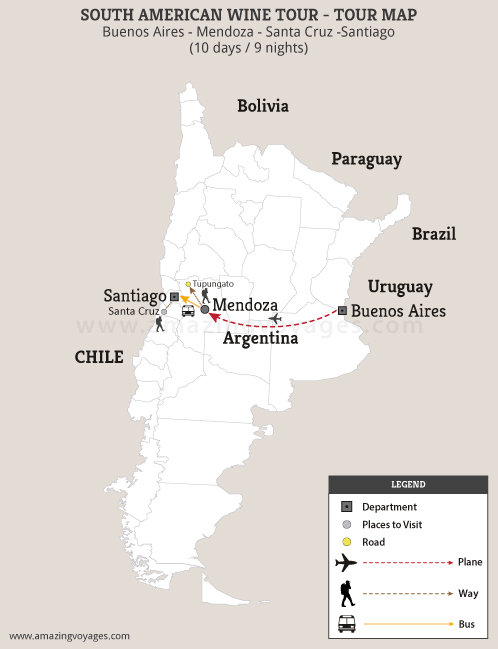