A sublime Birding tour through Ecuador from the high cloud forests to the lowland Amazon basin.
12 days/ 11 nightsMindo - Papallacta - Amazon

ITINERARY
Day 1: Quito
Arrival in Quito, reception and transfer to your hotel.Dinner at your hotel.

Day 2: Quito - Tandayapa Valley
After breakfast, transfer to the Tandayapa Valley, home to the fabulous cloud forest habitat in the Choco bioregion of Ecuador. Transfer to your purpose built birding lodge, on the edge of the forest and complete with all amenities. The Choco is a narrow zone of wet forest located between the Andean mountains and the Pacific coast of western Ecuador and Colombia. It is home to an incredible diversity of plants and animals, many of which are found nowhere else. Bird Life International recognises the Choco as having more restricted-range species than any other area in the Americas and hence there are more endemic birds here than anywhere else in the New World. Much of the original Choco forest has been destroyed, particularly in the lowlands, but where your lodge is located offers easy access to some of the remaining sites, covering a range of habitats between 400m and 3400m in altitude. There are 58 Choco endemics and over 31 species of hummingbird and with 14-18 species sighted on most days. The birds are present all day long, but the greatest numbers appear on wet afternoons, especially in the last half-hour before dusk as they consume large quantities of nectar for energy to last the night. The numbers of species are lowest in the height of the dry season (June and July). The birds allow very close approach, and over a few days you will soon get to grips with the species, which can be overwhelming at first. All meals and tours with an English-speaking guide are included and the area boasts over 600 species.

Day 5: Tandayapa Valley - Papallacta
After breakfast, we drive back towards Quito before heading northeast to Papallacta, on the edge of the Cayembe-Coca Reserve. Accommodation at the Papallacta Spa. The Cayembe-Coca Reserve has an approximate area of 400,000 hectares (1 million acres) and is composed mainly of Paramo, primary forests, rivers and lagoons. It is considered home to one of the highest animal and plant diversities in the whole of Ecuador with over 500 species of birds. Species found within the area include Rufous Bellied Seed Snipe, Giant Conebill, Sword Billed Hummingbirds, the Masked Mountain Tanager and the endangered Andean Condor. After lunch, birding tour with an English-speaking guide.

Day 6: Papallacta
Full days birding programme with a visit to San Isidro, situated at 2050m with trails leading through different elevations that pass through habitats ranging from 2400m to 1850m. This allows for observation of Andean birds from the lower reaches of the temperate zone down into the heart of the subtropical zone. Birds such as the Greater Scythebill, Bicoloured Antvireo, Peruvian and Giant Antpittas and White-rimmed Brush-Finch are a few of the exciting rarities that make their homes here. Even the White-faced Nunbird may put in an appearance as it has been seen at San Isidro more times in recent years than at any other single location on the entire eastern slope of Ecuador. Return to Papallacta Lodge.

Day 7: Papallacta - Quito
After breakfast, a morning of birding around the Guango Lodge located some 30 minutes from Papallacta. This area is located in a zone classified as humid temperate forest, a habitat distinctly different from San Isidro and characterized by its more stunted trees (and thicker canopy), cooler climate, and a totally different bird and plant composition. Morning birding before returning to Quito and your hotel.

Day 8: Quito - Coca - Napo Wildlife Centre
After breakfast, transfer to the airport for the flight to Coca, a 25-minute flight that takes you over the Andean Mountains' majestic snow-covered peaks and down over 8500 feet (2600 meters) into the Amazon Region. The flight destination is the port town of Puerto Francisco de Orellana, locally known as Coca, where you will transfer by car to the dock. Here you shall board a large, motorized, covered canoe for a scenic two-hour trip down the Napo River. Upon arriving at the entrance of the Napo Wildlife Centre, we switch to smaller, dugout canoes and are paddled up the blackwater creek to the lake and lodge (no motorized transport is allowed on the creek or lake so that wildlife is not disturbed). Accommodation at the lodge which offers all amenities, comfortable cabins and two close -by canopy towers. One of the canopy towers is a 120-ft. (36m) high structure which opened to guests in November 2004 and offers fantastic views above the forest floor. This is the second tower at the Napo Wildlife Center (the first is attached to the dining hall and allows great views of the lake). The canopy tower is located about 20 minutes from the lodge deep within the terra firme forest. As you ascend the 12-story tower, you pass through different levels of the forest and emerge on top of a huge Ceiba tree. Here you cross onto a wooden platform that is actually built into the crown of the tree and experience the view formerly reserved only for the birds and monkeys. The tower was built by digging down below the roots of this Ceiba tree with a cement base below the level of the tree - the result is that the tree is sustaining no damage from this tower. The platform in the top of the tree was constructed by tree platform specialists to ensure that the platform does not scar the tree. From top to bottom, there is no finer canopy experience in Eastern Ecuador. Flocks of colourful tanagers pass right through the canopy of the tree, Blue-and-yellow Macaws fly past, and in nearby trees Spider and Howler monkeys search for fruit. There are two species of large toucans which call in the early mornings and afternoons, and the life of the forest canopy opens before you (lucky guests have even seen both Harpy Eagles and Crested Eagles in a single morning!).

Day 9 - 10: Amazon Jungle
After breakfast, Several days of birding opportunities lie ahead as two specially constructed blinds at two of the most accessible parrot and macaw clay licks in Ecuador are found here at the Napo Wildlife Centre Reserve. Visiting these clay licks helps to support an 82-square-mile private reserve and also supports the Yasuní National Park, which has been designated as a UNESCO Biosphere Reserve. Clay licks like these are scattered throughout western Amazonia and although locals have always known about the clay licks, clay licks did not gain the attention of scientists until 1984. It is now known that clay licks form an important part in the nutritional requirements of parrots and macaws. Both parrots and macaws feed on nuts from a variety of trees and as some of these have developed defences against predators, they have evolved a toxin to protect the nut. Parrots and macaws have evolved with these trees, and have developed their own response to the toxins in the nuts. The answer lies in the clay as certain minerals in the clay are able to neutralize the toxins in these nuts. Once a deposit is identified, parrots and macaws will come many miles to feed on the clay. Blinds have been built at two of these clay licks to welcome visitors. The blind nearest the Napo (Saladero de Loros) is typically visited by hundreds of individuals of Mealy Parrots, Yellow-crowned Parrots, Orange-winged Parrots, Blue-headed Parrots, Dusky-headed Parakeets, and occasional White-eyed and Cobalt-winged parakeets. The blind at this site is huge, with plenty of space for upwards of 30 guests at a time, and even includes a basic bathroom. Access is a simple 50m walk along an improved path. The blind in the forest (Saladero de Pericos) is typically visited by a thousand or more Cobalt-winged Parakeets. The noise of which is incredible! From late October through to early April, hundreds of Orange-cheeked Parrots are also found in the mix, as are rarities such as the Scarlet-shouldered Parrotlet and occasional Scarlet and Red-and-Green macaws. It is almost certain that other small parakeets visit this clay lick, and new species for the region and Ecuador are just waiting to be discovered. [This is the site incorrectly listed as "La Selva" and "interior salado at "La Selva" in The Birds of Ecuador (Ridgely and Greenfield, 2001)]. Access to this clay lick involves a 700m hike on an improved path with stairs and boardwalks where necessary. The blind itself will hold upwards of 20 guests and affords fantastic views. Birdwatchers should note that this is where one can find the famous "Manakin Trail" with 6 species of manakins.

Day 11: Amazon Jungle - Coca - Quito
After breakfast, transfer to the airport for the return flight to Quito and accommodation at your hotel. Dinner at your hotel.

Day 12: Quito
After an early breakfast, transfer to the airport for your return flight home or possibly extend your Ecuador birding trip with an unrivalled tour to the Galapagos islands.

Back to Top
PRICE
Please Contact Us
WHAT IS INCLUDED / NOT INCLUDED
Our price Includes:
Price includes international return flights from London, all accommodation in birding lodges and a 5 star hotel in Quito, all tours with specialist birding guides including most entrance tickets except the Amazon Reserve fee, and all domestic flights in Ecuador.
Our price does not include:
Meals not specified, airport taxes and travel insurance are not included in the quote.
Back to Top
TOUR MAP 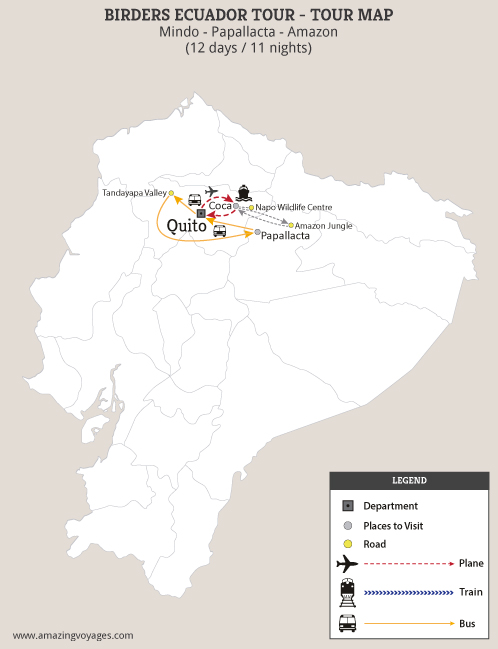