ITINERARY
June 21 . LIMA
Arrival to Lima, reception at the airport and transfer by private vehicle to the 5* Country Club Hotel.

June 22. LIMA (B & L)
After breakfast, a private guided visit of colonial and modern Lima, including the cathedral, dating from 1654, the main square, which still houses the original bronze fountain built in 1650, and the San Francisco Convent and its catacombs. Known as the city of the kings, Lima was founded in 1535 by Pizarro and rebuilt in 1991, the same year that UNESCO declared it a world heritage site. One of the very few South American cities that preserve the colonial past, Lima was home to the Spanish viceroy during the time of the Spanish colonialists. The tour will include a visit to the residential areas of San Isidro and Miraflores, before stopping at Larco Mar to enjoy a view of the beautiful Pacific Ocean. Lunch at the internationally renowned Rosa Nautica, the best seafood restaurant in Lima. After lunch, a visit to the Larco Herrera Museum, one of the best private museums in Peru. With a fabulous collection of northern cultures particularly of the Mochica culture. The museum was founded in 1926 in Trujillo but was transferred in the 1950's to Lima. There is a room of mummies, textiles (including a Paracas cloak over 2000 years old), and several gold and silver vaults. Return to your hotel.

June 23. LIMA - CUZCO (B & D)
After breakfast, transfer to the airport for your flight to Cuzco, the ancient Inca capital of the Incas. After the one hour flight, reception and transfer to the 3* Sonesta Posada Hotel, located in the plaza de Armas of Cuzco. After a recommended light lunch, a private guided tour of Cuzco including the Cathedral, Qoricancha temple, the Inca fortress of Sacsayhuaman overlooking Cuzco, Qenko and Puka Pukara. Return to the hotel. Dinner at the Cava San Rafael.

June 24. INTI RAYMI FESTIVAL (B & L)
This is the day of the Inti Raymi - The Quechua name for the Festival of the Sun. It was a time of offerings, sacrifices, dancing and celebration. In the old capital city of the Incas, this festival continues with all its ancient royal pomp and energy. Dances and ceremonies are played out at the worship center of Sacsayhuaman above Cuzco. Attendance with a private guide to the impressive festival of the Inti Raymi at Sacsayhuaman esplanade and experience yourself this ritual celebrated since the Inca times. It is the central act of the celebrations elaborated in Cusco during this month evoking the religious ceremonies of the Inca Empire. The staging begins in the Qoricancha, continuing to the Main Square of the city and ending at the esplanade of Sacsayhuaman. The central most important character is the Inca. When the ceremony ends the presentation of folkloric groups begins. Box lunch included.

June 25. URUBAMBA (B & L)
After breakfast, a private full-day excursion to Urubamba, the sacred valley of the Incas and to the ancient Inca market town of Pisac. Lunch in Urubamba or a picnic lunch will be provided. A visit will be made to Ollantaytambo, the only Inca town that was not defeated by the Spanish and a chance to explore the ruins before returning to Cuzco. Return to your hotel to relax and unwind.

June 26. CUZCO - MACHU PICCHU (B, L & D)
Early transfer to the station for the Vistadome train to Aguas Calientes. Arrival to Aguas Calientes, assistance with your luggage to the magnificent Machu Picchu Pueblo Hotel set in a cloud forest before boarding the bus for the short ride up to Machu Picchu, the ancient Inca citadel. A guided tour of Machu Picchu, the most spectacular ancient city in the world. Built by the Inca Pachacutec, and comprising stone blocks fitted with masterful precision, Machu Picchu harmoniously blends into the mountain landscape. There are many theories as to the origins behind Machu Picchu but three of the most popular ideas include a temple to the sun, a fortress against the jungle inhabitants or a sanctuary for the Incas. This fabulous city has houses, temples, warehouses, a large central square, all connected by narrow roads and steps, and is surrounded by terraces cut into the mountain side which were used for agriculture. Lunch at the Sanctuary Lodge hotel before returning to the site for further exploration. Return down to Aguas Calientes and transfer to your hotel for dinner and accommodation at the Machu Picchu Pueblo Hotel.

June 27. MACHU PICCHU - CUZCO (B)
After breakfast, early opportunity to return to the site (optional) and enjoy a wonderful sunrise over Machu Picchu. Today no guide is provided as we feel that Machu Picchu requires a certain amount of self discovery to be fully understood. Take any of the several paths around various parts of the site (we will provide a map to help you), trek up to Wayna Picchu or walk down to the Inca's bridge. Let Machu Picchu unfold all its mysteries for you, take in the breathtaking cloud forests and jagged mountains, or marvel at the extraordinary Masonic precision of the ancient Incas. Either way, your day of self discovery will be a day never to be forgotten. Return back down to Aguas Calientes by bus. Some free time to visit the colourful town before returning to Cuzco aboard the Vistadome train. Transfer to the Sonesta Posada Hotel.

June 28. CUZCO - LIMA (B)
Morning at leisure before transfer to the airport for the flight back to Lima and your return flight home. 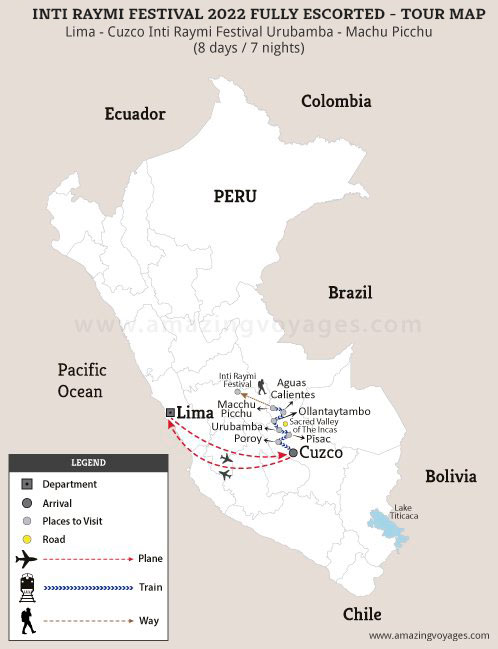